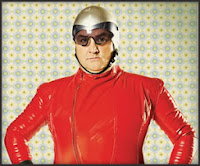 While the Cassidy family was out on a constitutional they saw a flash in the sky and a shooting star.  When they get home they find a man in a red jump suit passed out on their living room floor.  It HAS to be an alien right? 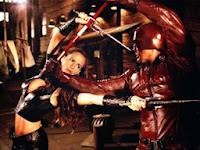 I'll defend them both: Daredevil and Elektra.

As a Marvel movie fan, I know I'm not 'supposed' to do this.

After all, Ben Affleck is over in the DC Universe as Batman now (albeit controversially), and "Daredevil" was released in 2003 by Fox. The rights have reverted back to Marvel since Fox failed to produce another Daredevil flick before October of 2012.

And then there's Elektra, the 'not-true-to-the-comic-book-enough' 2005 movie. Fox made that one, too, only Marvel sadly does not have the rights back (yet).

And now I present my defenses:


Because Daredevil and Elektra are a couple, I enjoyed watching their stories unfold together. I appreciate how this was planned and how the characters met. Specifically, I tend to view superhero movies in particular through a feminist lens, but I really enjoyed what both movies accomplished, particularly concerning Elektra.

The journey of heroes

I'm disheartened that the Elektra movie in particular is overlooked so frequently. While I agree with the criticism that the film included a gallery of villains (denying each of them their depth), the climactic action was especially appropriate for the female hero's journey, with a special focus on its cyclic nature.

Too often we see the trope of 'single mom and her child' in which the male protagonist fills the missing role for them. Elektra fills that role - additionally, she is not simply a nurturer, but a protector.

As a viewer who had not read the comics, I was most skeptical of the films because of the costuming. However, learning about Daredevil's origins (and his reason for donning the outfit), I completely appreciate the deliberate costuming suggestion.

About the devil costume and the lingerie...

The outfit was actually a reason I hesitated seeing the Elektra film in the past. Judging from the advertising materials, it would seem as though Elektra constantly fights enemies in her skimpy red outfit, serving as simply eye candy for a male audience. Only after watching the film did I realize the true meaning behind it. She dons the outfit as a true means of empowerment, skill, and confidence.

These movies came out years ago, but I feel like Fox missed an opportunity to market these films to more specific audiences in addition to existing comic book fans. Elektra, for example, is a movie that every mother should want her daughter to see. Daredevil is a wonderful hero for kids without direction or boys who feel the absence of their fathers - and as an Irish American, it was pretty cool to see the journey of a superhero emerge from Hell's Kitchen. (Seriously, he could be the Boondock Saints' other brother.)

I appreciate Elektra having a child to mentor - one who doesn't just need a nurturing mother figure in her life (in fact, the dad's the one that usually cooks the dinner...), but someone more like an example or role model. That said, Abby's annoying. The fact that there are two female characters in this trope makes it no less annoying when it's a male role model and a smartass kid being overly annoying.

Abby's problems aren't makeup and boys - and that's good - but she was still pretty snotty.

Jennifer Garner and Ben Affleck both performed well in their roles. That said, the casting wasn't at the level that contemporary Marvel movie fans have come to expect. (Is RDJ actually Tony Stark? Yes. Flawless casting happens.)  -- SPOILER BELOW CUT

Street Fighter is an odd movie. It less movie and more of a time capsule.

All the cheesy goodness of the '90s is captured here. Honestly, it could be a new throwback movie today - like Tropic Thunder or The Expendables. Add it to your Netflix Instant Queue now and NEVER TAKE IT OUT. Don't worry if you haven't played the games the movie is based on.

The sheer awesomeness of this movie transcends the games and holds its own, so don't worry.

Can't have a hero without a villain.

Raul Julia is amazing as M Bison. He plays such a maniacal mad man and has so many great lines. This movie has so many good and decent actors and RJ steals the movie.

If you would have told me he played Gomez Addams, I would have never believed it.

I didn't go into this movie with very high expectations. The last Superman movie just kind of left me feeling meh. This one was better - one of my favorite movies featuring DC characters - but compared to "Smallville," "Lois & Clark," or any of the recent Marvel movies, it didn't really stack up.

Had to get that out of my system.  I been rewatching the whole Startrek Series in canon Timeline and I got to "Wrath of Khan" last night. Probably one more painful points in the series for me.

Growing up, I was a lot like Spock. I had a hard time fitting in and I was rather logical. (Still am today,  I can just compensate better.) So watching Spock die was as about the same as watching Optimus Prime die.

"Wrath of Khan" wraps up the eugenics wars time arc and the crew of the Botany Bay. Kirk leaves Khan and his crew on  Ceti Alpha V. Well there was a problem, Ceti Alpha V turned into a hellscape desert planet.

My only problem with the movie is how they use this fact in the movie. 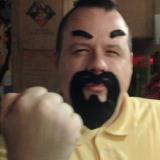 As a former LARPer (Live Action Role Player),  I have been a Feralkin Paladin, a Centurion Guard, Pixie Sage and an insane chef who almost killed the whole town. I have even been on staff at a game before. So "Unicorn City" was a bit strange for me because I spotted things that would never happen at a LARP. There were real weapons, unpadded weapons, using a car as a prop. Plus, just a lot of modern things in a fantasy setting like the badminton game.

I couldn't really suggest this movie unless you role play in some manor. If you don't, then all this movie will have for you is laughing at socially awkward nerds. You're better off watching another movie. Even for me, being part of the 'off culture,' it was a rough movie to watch. I just didn't like it too much. I couldn't find a reason to like the characters. Heck, I didn't realize until the credits that half of the characters had names.

Yes, I know the game was made over night but wow there was a lack of effort. LARPs can take a year of writing and testing before they can even make it to a beta test. The movie just shows a lack of research. It would be like having a World War II movie and swapping Hitler with Charlie Chaplin. They look the same but to think of them as such really shows a lack of knowledge on the subject.

What is my reason for being behind this guy? Why should I want him to succeed? He is a jerk to his friends, he can't see that Marsha has a thing for him, and just a one note stereotype. The movie tries to make his brother look like the mean one, but if your no-prospect brother was sleeping in a closet in your place without paying rent all the time, wouldn't you be angry? There is no character development.  He might as well be scenery.

Just avoid this movie. Watch "Krod Mandoon," "The Guild," or hell, go out to an actual LARP. (Do this at your own risk though. Those people can be a little wacko, right Tara?)  I don't care if you get Netflix for free, don't bother with this one; it isn't worth your time. 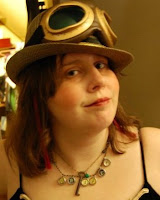 All I knew about this movie before I started watching it was that it involved LARPing. While I wouldn't say the movie depicted LARPing as I'm at all used to it, I did enjoy it as a charming, lighthearted love story. I think Jason took the movie a bit too seriously (which is weird...because he's Jason). I didn't take this movie as making fun of LARPers at all.

Knowing the potential this movie had for possibly ridiculing LARPers, I was suspicious of it. These kinds of movies really have to display some geek knowledge for me to become fully invested. This movie succeeded - especially considering they played "Dawn of Days" (instead of "Dungeons & Dragons") and Voss wants to work at Warlocks of the Beach (instead of Wizards of the Coast). The quirks were genuine and that helped me ease into the movie.

Do you remember that time in "Back to the Future II" when Marty McFly travels to 2015 and finds that there are still future incarnations of "Jaws" movies playing in the theater? It was a good joke - and a funny one, mainly because it's true.


Many franchises extend for multiple sequels. Examples include "Indiana Jones" (and its sad attempt at a comeback years later), "Police Academy" (there are seven), and "Pink Panther" (with ten). There seems to be a difference between movies like this and the epic, universe-encompassing franchises such as "Star Wars," "Star Trek," and "Lord of the Rings." However, some movies have made me think about the legitimacy of sequels. Do they exist to tell a story - or just to get more money out of the audience?

Email ThisBlogThis!Share to TwitterShare to FacebookShare to Pinterest
Labels: back to the future, franchises, lord of the rings, movies, sequels, tara
Older Posts Home
Subscribe to: Posts (Atom)